Leadership series: Meet the superintendent who is all smiles this year

Many things make Missouri's Lee's Summit R-7 School District special, according to its Superintendent David Buck. But at the center of it all are the students.
By Micah Ward
January 3, 2023

Dear district leader: What keeps you up at night? Is it the stress of your job? Is it your desire to keep your community satisfied?

For one Missouri superintendent, it’s the fear of failing at supporting his students, because they’re the reason he pursued a career in education in the first place.

“What always keeps me up at night is that I want every kid to grow up to be an adult I’d be proud to call my neighbor,” says Superintendent of Lee’s Summit R-7 School District David Buck. “That’s never changed my entire career. And part of that is having a pathway after high school. You’ve got one of the three E’s: You’re either employed, enlisted or enrolled. That doesn’t mean that plan is going to stick, but we hope you’re prepared in case it doesn’t work and other opportunities open up. That’s what always keeps me up at night.”

With that at the back of his mind, Buck puts his students at the center of all that he does because he loves kids and learning, two essential characteristics of a successful district leader.

His career in education, however, didn’t begin like so many others.

“I went to college and became a botanist for the conservation department,” he says. “I had worked in a factory before that, working on a sandblasting machine. I was a botanist for the Missouri Department of Conservation and loved that during the summer. During the winter, you had a desk and a computer… I didn’t like that as a young person, so I went into teaching because I love kids and I love learning.” Twenty-one years ago, Buck’s journey as an administrator would begin, thanks to some peers who convinced him to apply for a principal job.

“I was not certified,” he says with a chuckle. “I was a dog that caught the car. I won the job and had to hurry and get certified.”

Since taking that position, he’s held several roles—as a high school principal, assistant superintendent in charge of curriculum and instruction as well as human resources, and now superintendent for the last eight years.

“The last three of those eight years have been here at Lee’s Summit, which is the fifth-largest school district in the state of Missouri with just shy of 18,000 students,” he says.

For many districts across the country, it’s been a busy semester considering schools are in their first year of “normalcy” since the pandemic. And Lee’s Summit is no exception.

“Lots of things keep me busy,” he says. “We’re in the middle of a $242 million bond project, the second-largest passed in Missouri history. We built a new middle school and renovated some other facilities, but we’re still in the middle of that project. We’re in the middle of an $80 million rebuild of a high school that’s 70 years old. And then with that, we’ve got a couple of new projects going on. We bought an edutainment theme park kind of place with early childhood at the center of it. And then we’re going to have hospitality programs, environmental science programs, and run all 18 elementaries. Every single grade will come and do culminating science experiments multiple times throughout the year.” His high schoolers, he mentions, are just as busy.

“Next year we’re going to add geometry and construction,” he says, regarding his high schools. “So we’re building a facility—it’s been almost $12 million in three different facilities. We’ve built a space where they’re going to learn geometry, but hands-on, while they build sheds, tiny houses or whatever it might be.”

“We’re in our second year of an aerospace academy. Last year we spoke with Administrator Steve Dixon, who runs the nation’s FAA and used to be the vice president at Delta. And one of the questions we had for him at the end of it was, ‘What do we need to do to be one of the best in the nation?’ Because we have several programs that are considered lighthouse programs. And he said, ‘You’re already there. Just opening doors, doing what you’re doing. Nobody else is doing this.’”

As far as academics go, students at Lee’s Summit are doing phenomenally well, according to Buck, despite the national narrative.

“You know we’re post-Covid. Our kids actually did pretty well,” he explains. “The vast majority of our students are on track. We have a few kids that are not so we have a gap there. But overall it’s been a really positive and happy year. We have volunteers in and parents in the building, activities going on, and our kids are doing really well. Our academics went up. I know everybody’s hearing the national narrative of ‘academics are down,’ but ours went up. And we’re so excited about that.”

Ensuring each and every student meets their academic potential continues to be a top priority for Buck, and that was the case even before the pandemic.

“Our priorities are continuing to expand opportunities for students and make sure we don’t lose kids between the cracks,” he says. “We also know there’s an employment shortage in our industry as well. Right now we’re doing really well in that area. But we’re also seeing our applicant pool shrink and I do have some support staff positions open. So it’s also doing what we can to retain our staff. We have the lowest turnover in the metro (Kansas City) and we want to keep it that way as well as attract and grow our own. Those are priorities for us because we can’t help people if we don’t have people that do it. We’re in the people business. We spend around 85% of our budget on salaries and benefits for people. That’s important to us, to make sure we have a talented pool.” Speaking to his school staff, they’re also having a terrific year, based on what he’s heard from teachers since the pandemic. However, like most schools across the country, student behaviors have certainly been affected.

“Middle school kids who may be playing with Hot Wheels, that kind of thing,” he explains. “We’re seeing behaviors go longer, and that creates some challenges. Some younger kids don’t have the core strength and stamina that the average young kid had before, and so those are pieces we’re working through. We’re hoping those are temporary changes, but it still requires us to adapt.”

Under his leadership, Lee’s Summit has become an increasingly remarkable district. Yet, if you were to ask Buck himself, he would tell you it’s the students who make it so unique. 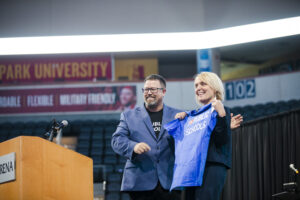 “Many things,” he says with a smile regarding what makes his district so special. “We’re a high-performing district that offers more opportunities than any other district in the state to kids. And we’re innovative. We’re willing to think out of the box. We’re willing to do things that are non-traditional to help out, not only in our community but also our kids who are hoping to stay in our community and thrive. That’s what sets us apart. We’re very innovative even though we’re a larger district. Yet, we do very well on traditional metrics and scores.”

“We perform well not only in the classroom but also in extracurriculars and activities. I think we had a team finish seventh in the world in cybersecurity competitions last year. We have a nationally ranked robotics team. The drumline at one of our high schools was ranked 28th in the nation. We excel both in and outside the classroom, and we do it because we love kids.”

More from DA: Leadership Series: It’s time to reconnect students to their school